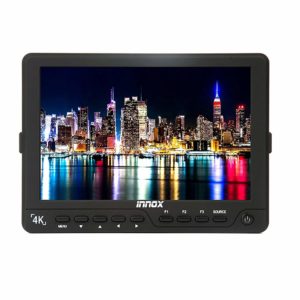 INNOX IN7H4K
Back to products
Next product

The INNOX IHDWL400 is essential in today’s increasingly wireless production world. The IHDWL400 features uncompressed, zero delay wireless video in a lightweight and affordable package. With a 400 foot range, this system is perfect for various types of uses such as with wireless follow focus systems as well as gimbal and Steadicam operators. The IHDWL400 is perfect for anytime you need to be untethered from the camera.

Zero Delay and 400 Feet of Range

The IHDWL400 supports zero delay video transmission, which makes it incredibly useful with wireless follow focus systems where timing is critical. It features a 400 foot range to give you the freedom to move about without having to worry about losing signal.

Many wireless systems compress video, which affects the quality as well as introduces delay. The IHDWL400 is able to send uncompressed video up to 1080 60p with zero delay.

The new IHDWL400 has mounting points for Innox Quick Mount system, which is designed to give operators more options for mounting the IHDWL400 to various gear. In addition, it makes mounting the receiver to a monitor easy and clean. Now you don’t have to spend time trying to figure out how to rig up the IHDWL400.

Whether you are using HDMI or SDI, the IHDWL400 has you covered. It supports both HDMI 1.3 and 3G-SDI so you get uncompressed high definition video up to 1080 60p.

Send your signal simultaneously into 4 receivers.

To keep the system light and the cost of use low, we included Sony L series battery plates. They come pre-installed and allow you to power the units easily and reliably. The units also include 4-pin Lemo compatible power connectors so you can supply power externally with the included P-Tap to Lemo compatible cables. This allows you to use the same pro batteries that are powering your camera to power the IHDWL400 as well.

Durable, Reliable
and Easy to Use

The IHDWL400 is made out of durable machined aluminum and is extremely easy to set up. You don’t have to mess with complicated menus with its easy-to-use wireless channel selection switch. Just power on the units and they will sync in about 20 seconds or less. The transmitter is small and lightweight so it can be mounted just about anywhere like to your camera’s shoe mount. The receiver features five internal antennas to ensure a strong signal as well as 4 signal strength LED indicators, making it easy to see the signal strength.

The IHDWL400 ships inside of a durable hard case to make transporting easy. The two “L” series batteries plate are included, making it easy to get up and running as soon as you receive your IHDWL400 kit. You will also find an articulating arm and clamp to help you mount the units. The kit also includes two P-Tap to Lemo compatible cables for more power options, making it the complete package.

There are no reviews yet. 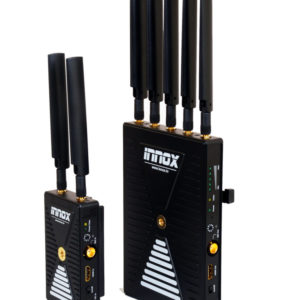